The Ronde van Calderdale is a sportive- a challenge ride for cyclists- which is quickly making a name for itself among those particlular riders who like a hard day in, and out of the saddle. It’s named after the Ronde van Vlaanderen, or Tour of Flanders, of which steep climbs on cobbled roads are the big feature. It attracts huge crowds of beer-fuelled Belgians, who scream their encouragement from the roadside on iconic ascents such as the Paterberg, from where fellow-blogger I Do Not Despair took this amazing photo, of Fabien Cancellara making his race-winning break.

So I knew it would be tough. I’ve moutain-biked in Calderdale before, and marvelled at its dramatic topography- steep sided valleys, snow-clad moors and criss-cross lanes still bearing the waggon-tracks of an industrial past. But I had no idea it would be this tough.

When gently lulled into accepting the challenge by my good friend, CTC Cycling Development Officer Gavin Wood, I made some naive assumptions. 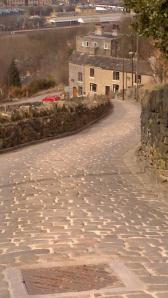 So there I stood at the start, nervously checking out the other riders. Thinking “Why do they all look twice as fit as me?”. I marvelled that they all seemed to have just returned from a training camp in Lanzarote, and expected this to be tougher. And I eyed up their bikes, all many kilos lighter than my trusty steel tourer. And then, just before I could back out, we rolled out.

To be fair, I did ok. The cobbled hills were more severe than even I’d feared. I couldn’t imagine the reasons why these roads existed; they were too steep for a horse and cart, their surfaces so rutted my wheels barely gained purchase. However I rode every climb I attempted, but even my tiniest gear felt like this:

But with some 75 miles in my legs (we rode to the start…) and 10 out of the 13 climbs completed I had to admit defeat. My preparation was too limited, my energy reserves were depleted and my legs just said “no more”. Accelleration was impossible, and I crept back along the valley bottom, feeling literally sick and tired.

There’s a debate going on at Bikeradar about if it might be the UK’s toughest sportive. I’ve ridden across Pyrenean passes- my account is here– and no day I’ve had on the bike matched this for intensity. It felt like I was either on the brakes or on the rivet (flat out) at all times. So I can say it was my toughest one-day ride.

On reflection, I gave this ride everything I had and tested myself completely. And there’s a sense I’ll have to return and finish this challenge which this time, almost finished me. So, as always, where there’s adversity, there’s hope.

If you’d like a workshop or a bespoke programme of activities for your school, college or group, exploring themes of challenge, change, hope and aspiration, please get in touch.